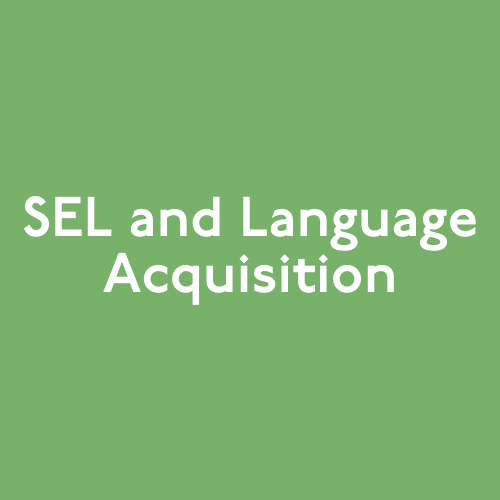 Our school systems should benefit the whole child, which is why so many educators and districts are moving to support social emotional learning practices within the classroom. How can we use SEL to support specific academic subjects, like a child’s linguistic capabilities? What kind of relationship is there between SEL curriculum and language acquisition, especially for English Second Language (ESL) students? In the following three-part blog series, we’ll discuss tactics of SEL and how they can help students struggling with language and communication.

Let’s discuss the trials of language acquisition that ESL students are likely to face. Stephen Krashen, a linguist currently working at USC, is best known for developing five hypothesis of second-language acquisition in the 1980’s. One of these is called the Affective Filter Theory. In this hypothesis, Krashen states there are certain affective factors that can change a student’s language learning experience. These variables are anxiety, self-esteem, and motivation. Students who are feeling anxious or have low self-esteem don’t acquire language to the best of their ability because a “filter” is formed that prevents acquisition from really sinking into the brain. Feeling stressed or anxious can make it especially hard for non-native English speakers to acclimate to a classroom.

That’s exactly where social emotional learning can help. Studies show that SEL boosts student wellness in the form of greater emotional competencies and active social behavior, as well as lasting decreases in negative outcomes like emotional distress. Many students are dealing with adverse childhood experiences (ACEs) at home, and it’s important that school be a safe place. For ESL students specifically, the language barrier both in school and out of school can be a terrifying, monumental obstacle — so it’s important that SEL practices are implemented to lower student anxieties. That way, students’ language learning “filters” will consequently be lowered as well.

Picture this: A typical elementary classroom. Rambunctious students, quiet students, sleepy students… and an ESL student who, after weeks of instruction, has struggled to adjust to the classroom climate. What might benefit that student is a fresh approach to language learning through SEL. As Krashen’s hypothesis assumes, greater emotional competencies allow a student to better acquire language. Developing emotional competence, like self-confidence and strength recognition, is a core SEL competency as explained by the Collaborative for Academic, Social, and Emotional Learning (CASEL). In this way, SEL practices can help to completely destroy the “filter” so that all students are comfortable and confident exploring the target language. Think of it as a new way to speak to ESL students.

As this series continues, we’ll consider the impact of motivation, how to use goals to quantify language learning, and the value of emotional vocabulary.

In the introduction to this series, we discussed Krashen’s Affective Filter Theory and how social emotional learning (SEL) can support students struggling to acquire language and communicate effectively. Building off of that, let’s discuss creativity in conjunction with SEL and how motivation can be an incredible factor in second-language acquisition.

Creativity is an awesome way to encourage students to engage with and produce language. Theater, as an art that requires the physical self, is by definition concerned with the “whole child.” It can be used as a powerful tool for self-expression. Participating in dialogues supports emotional expression and communication. It’s especially helpful for English Second Language (ESL) students who don’t often participate in class. They might benefit from a more interactive linguistic environment in which body language and facial expressions are extremely important to meaning. SEL tactics work similarly by employing the entire body to work expressively, not just the vocal tract. The intersection of creativity and mindfulness is something we’re especially interested  at Move This World, as creativity is one of the core pillars in how we deliver curriculum.

Allowing students creative flexibility opens the door to intrinsic motivation. When they choose to engage with the material not for a grade, but for fun, as many theater students do, they’re motivated by internal factors rather than external. Help students motivate themselves by present curriculum and facilitate language acquisition. The key is passing control over creative expression onto the student.

To tie everything together, let’s return briefly to Krashen. One of the affective factors he cites as inhibiting a student’s language acquisition is motivation. Without motivation, a student won’t acquire language as effectively. SEL and non-traditional learning techniques can be the perfect gateway motivators. The goal is for students to use creative expression to build intrinsic motivation for their academic efforts, including language arts. This approach would be especially useful for ESL students uninterested in their target language. Engaging with the language in creative and emotionally receptive ways will help acquisition sink in.

As this series continues, we’ll discuss the value of emotional vocabulary and goals for language acquisition.

Earlier in this series, we established that in order for students to acquire language most effectively, they should be unstressed and intrinsically motivated. Now let’s discuss setting goals and building an emotional vocabulary.

So what kind of specific social emotional learning (SEL) strategies can we use in the classroom to support students acquiring a new language? A core SEL competency is goal-setting. It’s important for students’ discipline and self-esteem to work toward personal and academic goals. Try to quantify language learning and set realistic standards for students. As established earlier in this series, students acquire language more effectively when they’re intrinsically motivated. Allowing students to set their own goals through creative and fun outlets like a bullet journal, a 100 days of learning challenge, a movie checklist, etc. can inspire motivation.

What if a student struggles to meet their goals? Learning a new language can be frustrating. Sometimes it’s hard to see any progress at all. Students struggle to name and express their emotions even in their L1, so it’s no surprise if English Second Language (ESL) students are even less likely to communicate their frustrations or feelings of negativity. It should be a priority to give them tools early on to begin understanding and expressing themselves in their target language. That’s where SEL can help.

SEL can facilitate this freedom of expression by teaching emotional vocabulary. Studies show that language supports a conceptual understanding of emotions. Giving a name to a feeling helps us understand that feeling. An example would be the 10 Emogers we use within the Move This World curriculum. Similar studies have documented that impairing people’s access to the meanings of emotion words actually impairs their ability to read emotions on faces. So building an emotional vocabulary not only helps students understand their own emotions, but others’ emotions as well. Supporting students to articulate their feelings effectively will develop core SEL pillars like social awareness and relationship skills. That might look like students asking for help in math, making friends, discussing opinions about comic books, and more.

Worth noting is social research that documents how multilinguals report feeling personality differences between languages. For instance, a woman described feeling “gentle, softer” in her native Russian and “harsh, business-like” in her second language, English. An important step in the language acquisition process is developing this strong sense of self in the target language. When students are accomplishing goals and feeling confident in their own ability to communicate, they can be true and authentic versions of themselves in the classroom.

A goal for educators can be facilitating emotionally-driven conversation in the target language. Ask ESL students, what brought you joy yesterday? What are you grateful for this week? Can you choose a movement to represent your goal for today? Everyone should participate in SEL activities in the target language to build a solid vocabulary around their health, their feelings, and their goals.

It’s clear that language acquisition can greatly benefit from SEL practices. Facilitating an environment of empathy and creativity helps students, especially ESL students, to grow in a language they might not use outside of the classroom. The intersection of these disciplines is a fascinating opportunity for education and research that, hopefully, only builds with the expansion of SEL curriculum nationwide.

Sign up for Move This World’s newsletter to stay up to date on social emotional language.

Enter your email below.